You are here: Home / Writing / Why can’t I end a sentence with a preposition? 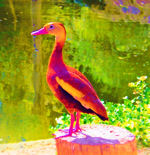 There are lots of rules out there that were never really, truly, rules. They were often the personal preferences of people who liked to speak out on the subject.

These are often the same people who say we can never begin a sentence with and, but, or, also, or however. They get very upset when their rules are broken, suggesting the writer has committed a crime against humanity…

First, let’s define a preposition. It’s a connective word that shows the relationship between a noun (or pronoun) and some other word in the sentence. Examples: at, by, for, from, in, of, on, to, and with.

AWKWARD: It is not easy to know that about which you are thinking.

NATURAL: It’s not easy to know what you’re thinking about.
Ending sentences with prepositions was something I looked into. In depth. There’s nothing to worry about. Now get up off the floor, stretch yourself out, dance a little jig, and cheerfully continue with your life!

Language is littered with “rules” – many of which seem to have been dreamed up by crazy people (let me pause for a moment to remind you of the “-ough” words).

So there are plenty of times when it’s quite acceptable to break these “rules” – it sounds just plain silly to write something like, “For whom is that pizza?” We know what you mean when you say, “Who’s that pizza for?” and we’ll think no less of you for saying it, despite the preposition on the end.

Winston Churchill’s rejoinder when told that you shouldn’t end a sentence with a preposition was: “That is nonsense up with which I shall not put.”

Then there’s the child’s complaint: “What did you bring that book that I don’t like to be read to out of up for?”

Remember that language is your tool, not your master.

What Should I Look for When Choosing Home Health Care? Guest Post by Nicholas Rubright As your … END_OF_DOCUMENT_TOKEN_TO_BE_REPLACED

Guest Post by Lance Cody-Valdez If you’re a solopreneur, you may be wondering if you’ll ever have … END_OF_DOCUMENT_TOKEN_TO_BE_REPLACED

December 2, 2021 Guest post: Teresa Siqueira If you have a busy … END_OF_DOCUMENT_TOKEN_TO_BE_REPLACED