You are here: Home / Personal / Watercolor by Jan Crook Pierson 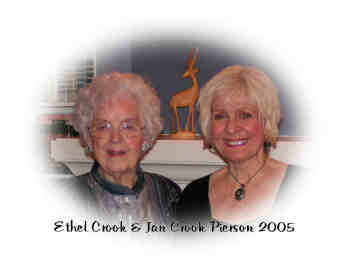 One ordinary day, in the peaceful place of my parents’ bedroom, I learned how to express my artistic talent in a new and unusual way. I was only four years old, but the lessons I learned that day were the beginning strokes of a masterpiece.

The tools were simple: my canvas was the mahogany headboard of my parents’ bed, and my brush was a bobby pin. Since it was the tag-end of the Depression, we couldn’t afford much, so whether it was poverty or creativity that determined the choice of media, I’ll never know. But I do remember the lovely picture I carved with that bobby pin: a little house surrounded by trees and a garden with a path leading from my mother’s side of the bed clear across to my father’s…

I drew lots of animals and sometimes made cages and pens so we could keep them in our backyard. I knew Dad would like the animals and Mother would love the house because it was a lot prettier than ours. I even drew circles of smoke coming out of the chimney and it wasn’t clinker smoke coming from a coal furnace, either. It was coming from a fireplace like my grandparents had.

It was my grandparents who gave my parents that beautiful bed for a wedding present, and maybe that was why everybody got so excited about the picture I carved on the headboard. Mother saw it first, and she cried. I don’t remember if my father liked my picture or not.

My brother and sisters and almost everyone else thought I should be spanked or at least have to stand in the corner. But Mother said no. She just hugged me and said she would always love that picture, even though she made me promise to use a pencil and paper after that.

I drew pictures and wrote stories until I quit having time, and that happened when I got married and started having kids of my own. Talented kids who used color crayons and marking pens instead of bobby pins, and who wrote on walls and bedspreads and brand new sneakers until I wanted to cry.

Which I sometimes did. And which always made me think of my mother and the wonderful picture she painted for me.

What Should I Look for When Choosing Home Health Care? Guest Post by Nicholas Rubright As your … END_OF_DOCUMENT_TOKEN_TO_BE_REPLACED

Guest Post by Lance Cody-Valdez If you’re a solopreneur, you may be wondering if you’ll ever have … END_OF_DOCUMENT_TOKEN_TO_BE_REPLACED

December 2, 2021 Guest post: Teresa Siqueira If you have a busy … END_OF_DOCUMENT_TOKEN_TO_BE_REPLACED