You are here: Home / Personal / The Waipahu, UAL’s first Stratocruiser by Ted Vorfeld

This photo is probably of the plane “Waipahu,” the first United Stratocruiser. It was named the Waipahu because the founder of United, a Mr. Patterson, was born and raised in Waipahu, in the same house our family lived in during WWII. We were all invited to the ceremony. 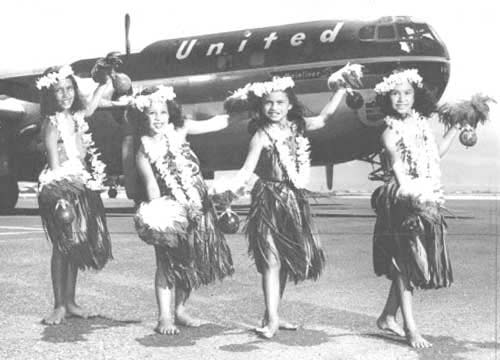 Later, in 1956, I flew one home from Oregon. It was an 11 hour flight from Portland Oregon.

These planes were modifications of the Boeing B-29, the famous planes of WWII, two of which dropped the atomic bombs on Japan. The B-29 was built mainly to bomb the Japanese homeland from the closest island, Tinian, a small island in the Marianas chain. When I visited Tinian a number of years ago, the concrete runways were still intact-they were very long as the bomb loads were heavy. There were something like 4 or 5 long runways. They needed more than one since a lot of bombers left at the same time and many were shot up so badly on their return and couldn’t wait to land.

When they produced the Stratocruiser for passenger service after the end of WWII, the plane had a very bad record of reliability and many of them crashed. One landed in Puget Sound and all the passengers were saved. The plane floated so long the Navy sent out a destroyer to sink it!

When friends left for the mainland on this plane we always stayed around a long time to make sure the plane didn’t come back due to mechanical difficulties.

On my first flight From Honolulu to Portland there was a bomb scare and they kept us in the plane on the ground for 3 hours while they searched the plane. Why they didn’t unload us is a mystery since the plane was fully fueled with gasoline and would have made an instant incinerator if there really had been a bomb and it had detonated. We were never told if they found a bomb, but I don’t think they did find one.

We were all very happy when the next aircraft, the DC-7 with bigger engines, came on line in 1957 and shortened the flight time to the West Coast to 7 hours. By the time I graduated in 1959, the Boeing 707 jet was in service and we made the flight in 5 hours.

Note: Here’s a 2006 article about this aircraft, published in the Honolulu Advertiser.

What Should I Look for When Choosing Home Health Care? Guest Post by Nicholas Rubright As your … END_OF_DOCUMENT_TOKEN_TO_BE_REPLACED

Guest Post by Lance Cody-Valdez If you’re a solopreneur, you may be wondering if you’ll ever have … END_OF_DOCUMENT_TOKEN_TO_BE_REPLACED

December 2, 2021 Guest post: Teresa Siqueira If you have a busy … END_OF_DOCUMENT_TOKEN_TO_BE_REPLACED