You are here: Home / Animals / The shining, intricate plumage of mallards 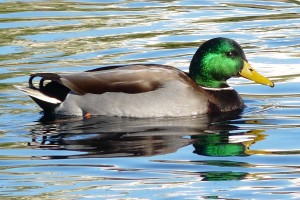 Recently I went to a nearby industrial park in Glendale that has some beautiful water birds. So far this fall I’ve only seen mallard ducks. This summer the pond was drained and left for awhile, and just recently did the mallards show up. I’m hoping the white-crested ducks make an appearance, and some gorgeous geese, but it probably depends on the management of the park. Unless they are independent, and park wherever they want.

Come to think of it, there were a couple of ducks in my back yard about five years ago. So who knows? Maybe the other ducks and geese have been up in the mountains during the summer. Can’t blame them.

The word duck comes from Old English *duce “diver”, a derivative of the verb *ducan “to duck, bend down low as if to get under something, or dive”, because of the way many species in the dabbling duck group feed by upending (Wikipedia). 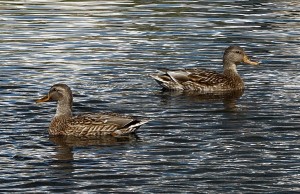 Mallards are beautiful creatures. The males are especially beautiful, but a thorough look at the females reveals a dignified, design-rich beauty as well. Just more subdued.

Wikipedia says that some people use “duck” specifically for adult females and “drake” for adult males, while others use “hen” and “drake,” respectively.

A duckling is a young duck in downy plumage or baby duck; but in the food trade young adult ducks ready for roasting are sometimes labeled “duckling.” 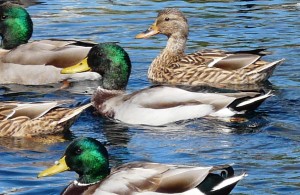 “Ducks are generally monogamous,” says Wikipedia, “although these bonds generally last a single year only. Larger species and the more sedentary species (like fast river specialists) tend to have pair-bonds that last numerous years. Most duck species breed once a year, choosing to do so in favourable conditions (spring/summer or wet seasons). Ducks also tend to make a nest before breeding.”

What Should I Look for When Choosing Home Health Care? Guest Post by Nicholas Rubright As your … END_OF_DOCUMENT_TOKEN_TO_BE_REPLACED

Guest Post by Lance Cody-Valdez If you’re a solopreneur, you may be wondering if you’ll ever have … END_OF_DOCUMENT_TOKEN_TO_BE_REPLACED

December 2, 2021 Guest post: Teresa Siqueira If you have a busy … END_OF_DOCUMENT_TOKEN_TO_BE_REPLACED