You are here: Home / Community Service / The ingenuity of the Filipino spirit

This is part of why I volunteer for the Yellow Boat of Hope Foundation . . . Judy Vorfeld 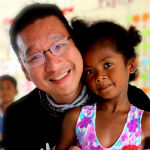 As efforts in areas hard hit by Super Typhoon Haiyan (Yolanda) now slowly take a turn from delivering immediate relief to putting in place mid-term recovery and long-term rehabilitation plans, help is much more needed from all of us.

It was only a month after Yolanda devastated the islands of Central Visayas that the gravity of destruction and the rehabilitation tasks became clear. And with attention fading, the worst that could happen is for everyone to forget that our countrymen in that part of the Philippines are still pretty much in crisis and need our continued support.

My heart was gripped with sadness when I saw two fishermen in Bislig, Barangay Tanauan, Tacloban City, paddling off the shore with so much effort on a boxy banca (boat). Upon closer look, it appeared to be a refrigerator. Apparently, the loss of others became their treasures, at least for a moment. One fisherman said, “ When you lost everything, the worst might just be the best.” Cryptic as it sounded, looking at the refrigerator banca, he made a valid point.

The ravaged fishing village was left with 90% of its fishermen with damaged or lost boats. One of the fishermen recalled that the storm surge came so fast and strong, they did not have time to move their boats to a safer place, “I did not think about our boat anymore. I just wanted to save my family and move to a higher ground.”

Another tragic story is that of Ferdinand “Nick” and Doris Quita’s family. The Quitas have four kids. They lost all of them to typhoon Yolanda. Doris emotionally recalled the conversation she had with one of her daughters the night before the super typhoon made landfall. According to her, while the family was gathered in the living room, her second child Megan cheerfully approached her with a drawing she herself made. It was a sketch of a happy family of six. Then out of nowhere, Megan asked her mother:

“Ma, what if all of us your children die? What will you do?”

Doris, caught by surprise said, “What are you talking about? Please don’t say that. If I lose all of you, I’d rather die. There’s no point of living without you. I might as well just commit suicide”

Megan interrupted her mom saying, “Don’t do that mom. You are not going to be in heaven with us if you commit suicide. We will not be complete. Don’t worry mom, I’ll take care of my siblings and we will come back.”

“Those were the last words of Megan,” Nick said. “My heart breaks every time I wake up, realizing that all of my children are gone. But my wife and I need to be strong for each other,” Nick added while struggling to hold back his tears.

With so many people still missing, the couple said they are still blessed to have recovered all 4 bodies of their children. 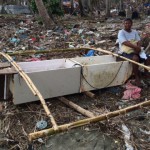 For the fishermen with similar stories, what makes it even harder for them now is to survive when the boats they rely on to put food on their tables and to earn a living are also gone.

It must really take a courageous heart to wake up everyday to a vast view of destruction that reminds you of what’s taken away from you. But to many of the survivors of Yolanda, life has to go on.

That is exactly the situation in most of the communities including in Tinagoan, Basey, Samar, where we met Jimmy Palagar. Help is still very scarce in many areas and these people are fighting hard to survive every single day. Jimmy, for example, recovered two refrigerators, tied it together and turned it into fishing boat. I tried to understand the strength they’ve shown after a tragedy of such magnitude. Perhaps it is not because Filipinos are naturally resilient, but maybe because to be strong is the only option left, for them and their loved ones to survive.

The people were a little unenthusiastic when I told them that we came to help and replace their lost or damage boats. They lamented that most of those who came and promised them help did not actually come back. I understand their hesitation but we let them know that the world cared about them.

After Typhoon Pablo smashed Davao Oriental in December of 2012, Yellow Boat Of Hope (YBH) Foundation through a Davao-based NGO (KINSABA) launched a project called Adopt-A-Fisherman. Its aim is to help fishermen by providing them with boats so they can go back to fishing and provide for their family. We have since turned over 168 boats in the province.

In the aftermath of Yolanda, an estimated 120,000 fishermen lost their boats. The number did not come as a surprise considering that most of the affected communities are in the coastal areas where fishing is the main source of livelihood. 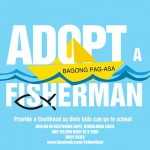 Through the generosity of donors, YBH continues to provide boats to severely affected families. So far, more than 200 yellow boats of hope are now under various stages of construction and project partners around the world already committed another 200 boats. The cost of a self-paddled boat ranges from P8,000 to P15,000 ($200-$350) depending on the community. A motorized boat costs between P20,000 to P30,000 ($470-$800).

While hundreds of boat will soon be ready for turnover, thousands of fishermen still need boats. Let’s rally together to restore their dignity as fishermen, one boat at a time.

Like all the yellow boats that bear the name Bagong Pag-asa, all the fishermen need is a spark of hope that the fishing boat represents. For them, a boat is hope and hope is a boat that will sail them through this phase of their lives.

To learn more about the Adopt-A-Fisherman Project and how you can help and support this endeavor, please visit the project’s website.

It is a no-brainer that efforts must focus on helping these families bounce back to eventually rebuild their communities. Perhaps, if we become one not only as Filipinos but also as citizens of this world, and stand together for those who are weak yet able enough to pick themselves up after a fall, moving forward may not be as hard after all.

In my second trip to Tacloban City, I felt anxious.

The first time I came to Tacloban to assess the situation a few days after the destruction, I went home with indications of downward spiral depression.

According to a family member, I became very reactive and impatient with things and, in a few instances, I raised my voice at home and at work. I admit that after that trip, I become so anxious about so many things and with what I witnessed.

The difference from watching it on television and to actually be there and see the amount of destruction first hand is unthinkable. I can’t imagine what it was for those who actually came face to face with the wrath of Yolanda. I remember seeing people walking aimlessly with nothing but a backpack or a plastic bag on their hands during my first trip.They were like “walking dead,” it is so heart-rending to witness.

I was so overwhelmed that I often stare blankly at random moments. As a veteran calamity responder, I have not seen anything of this gravity. I looked around and found nothing left to build upon on, no pieces to pick up. What troubled me the most was the fact that what we have is so big of a problem I didn’t know where to start and how to get help for these people fast. It is like a knock out blow after the Zamboanga crisis and the earthquake that struck Bohol and Cebu, which we have not fully recovered from yet.

After finally admitting to my self that I needed help, I underwent a debriefing. On the side, I went to work with foundations I am involved with – Tzu Chi and Yellow Boat Of Hope. The debriefing sessions did not really make me feel any better because my mind was somewhere else. I was hearing them but actually not listening. It was all a blur and a buzz. I was even offered a prescription for anti-depressant but I refused.

Surprising of all, after a few days of visiting communities and talking to people who displayed tremendous amount of faith, the heaviness I felt for several days was lifted.

I realized that these people have all the reasons in the world to be depressed, yet they are fighting back hard with determination everyday even if there is not much left to fight for. Most of them are homeless but they are definitely not hopeless.

In the end, what I really needed was to see the glimpse of hope that sparkles in the eyes and smiles of the kids, the courage of a mourning mom who lost her children, the ingenuity of a father who paddles a refrigerator banca and the resilience of the people whose spirits are not shattered. Truly hope radiates in their midst which shows that the Filipino spirit is stronger than typhoon Yolanda.

As I watched the fishermen paddle off the shore in refrigerators-turned-boats, I thought that these people have not given up hope. We should never give up on helping them.

When most people think of retirement planning, they think about money and how they can be sure that … END_OF_DOCUMENT_TOKEN_TO_BE_REPLACED

Note from Judy Vorfeld: this is not a political statement targeting any person: it is merely a … END_OF_DOCUMENT_TOKEN_TO_BE_REPLACED

Breezometer is one of my "go to" websites, and it is always offering understandable information, … END_OF_DOCUMENT_TOKEN_TO_BE_REPLACED