You are here: Home / History / Red Hill’s Tunnels under Oahu

There’s a great article on the history of the Red Hills Tunnels in today’s Honolulu Advertiser. 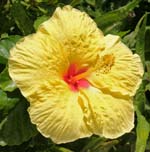 Ted Vorfeld, who is an engineer, sent the link, along with some memories of the Red Hills Tunnels (which at one time were classified top secret by the U.S. government):

Uncle Charles Mullin took us through the place many years ago. He was in charge of PWC Pearl Harbor at the time. Then they stored Avgas and had automatically closing doors at each tank in case of fire. You had only about 20 seconds to evacuate the chamber after a horn blared, then the door closed and the chamber was filled with carbon dioxide.

In recent years I worked on a project to repair leaks and coat the bottom of these tanks. Extremely difficult to work on or in them. (To locate and fix leaks in the tanks, they fill them with water and float a raft on the water to work from.) Peter Schubert (one of my former partners at Thermal Engineering) also did a number of projects to fix the fuel lines in the tunnel.

The father of one of my Punahou classmates (Lynn Boerner) was one of the key engineers who helped build the facility: Charlie Boerner. Lynn lives on the Big Island and raises horses. Her mother still is alive and running an organic farm in Hana and we plan to visit her later this year. Charlie died in Hana a few years back when a farm tractor rolled over on him. He was 90+ years old at the time.

Dad claimed the workers were kept virtual prisoners to keep the construction a secret.

The houses in Foster Village all contained a “pipeline easement” in their deeds.

When I worked for the well drilling company that grandad Bill Mullin founded, I learned that the rock in Red Hill is volcanic ‘tuff’, a kind of compressed cinder material that is relatively soft (compared to basalt anyway).

What Should I Look for When Choosing Home Health Care? Guest Post by Nicholas Rubright As your … END_OF_DOCUMENT_TOKEN_TO_BE_REPLACED

Guest Post by Lance Cody-Valdez If you’re a solopreneur, you may be wondering if you’ll ever have … END_OF_DOCUMENT_TOKEN_TO_BE_REPLACED

December 2, 2021 Guest post: Teresa Siqueira If you have a busy … END_OF_DOCUMENT_TOKEN_TO_BE_REPLACED