What did you do on New Year’s Eve Day? Many people enjoy parties at home or in the community. Some sit around watching chestnuts roasting on an open fire, while others watch fireworks, go snorkeling, or sip eggnog or hot tea while reading a good book or watching a fantastic movie. Not my energetic, outdoor-loving daughter and son-in-law!

Every year Shannon and Roger get up early and head for a campground called The Crags. It’s a popular route to Pike’s Peak. The campground is on the “back” side of the peak at 10,000 feet. From there, they hike up to the summit and back again, says Shannon, “…snow, wind and all. The weather down here is predicted mild but its always a bit more extreme up on the mountain. I’m hoping the wind isn’t as bad as the last three times we’ve done it.” Here’s Shannon’s description of the event, which she emailed to me this morning:

We begin at a beautiful campground called “The Crags” on a trail that goes up to the top of the Peak. Although it’s only about seven miles long, it’s a very hard, steep, exposed seven miles. When we started around 7:30 a.m. it was around 24 degrees. When we got back down to the campground around 2:30 that afternoon it was actually 41 degrees. The summit was around 18 degrees and the wind chill probably 15 to 20 degrees below zero. 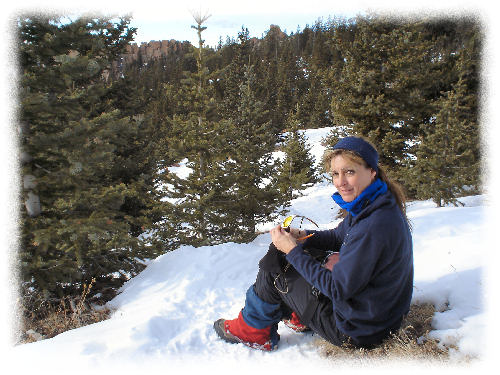 It went pretty well. No mishaps. Even though at the lower elevations it was a sunny, extremely mild day, the winds were, as usual, extreme! Ugh…those winds, Mom! But we did it. Just kept trudging. The summit house at the top was open so we really lucked out: we got to go in and have a cup of coffee, eat something, peel our jackets, etc. off, and use a real bathroom! (It isn’t always open!) We try not to stay too long before we head back down, but it’s such a great little break. 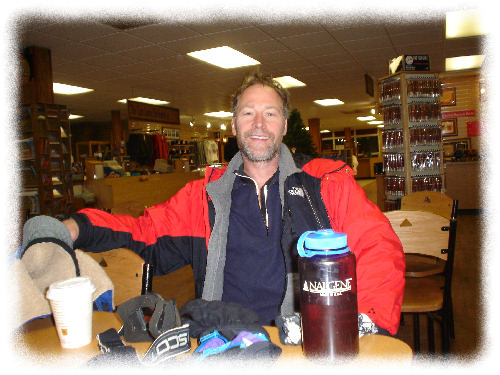 Roger Patrizio in coffee shop at the summit of Pike’s Peak. December 31, 2005.

Roger went out for a little run this morning, but I woke up around 6:00 this morning with a headache. (It came from my neck, which was really stiff from having to bend over and watch my footing for seven hours.) The good news: I fell back to sleep, and when I awoke it was gone. Better run, but just wanted to wish you a happy new year and give those kitties a scratch under the chin for me!

I hear a lot about Barr Trail, and Shannon explained why they use The Crags on New Year’s Eve day:

The problem with Barr Trail is that it’s 13 miles one way, and it’s hard to go up and back in the same day in the winter. Plus, there is a huge group of people who trek up Barr trail every New Year’s Eve, the AdAmAn Club. They’ve been doing it for years, and every year they add another to their club (thus the name). They start the day before New Year’s Eve and slowly proceed halfway to Barr Camp, where they spend the night. Then on New Year’s Eve day they head to the top. At midnight they set off fireworks that can be seen on a clear night for miles. Anyway, it’s difficult to get around them because they have big backpacks and they travel slowly. That’s why we use The Crag.

By Jacky Xu This might be your first time to hear it, but we will repeat it: A cluttered … END_OF_DOCUMENT_TOKEN_TO_BE_REPLACED