One of my friends and colleagues, Martha Retallick, of Tucson, Arizona, recently spent an exciting, exhausting week in Mississippi. She returned to Arizona last Sunday, and just sent the following message to her client and colleagues. Thought you might find it interesting. Even gripping. 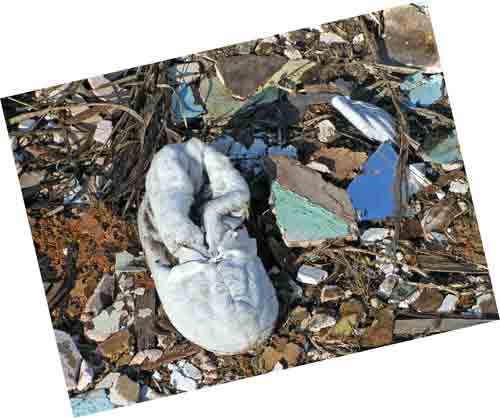 If you’re in business, you must always be seeking new business. That’s why I attend a lot of networking meetings.

In August, I sampled a new meeting, thinking that it might be a good source of prospective clients. It wasn’t. But I did stay for the guest speaker’s presentation on post-Katrina reconstruction.

Now, the business gurus say that you should project an upbeat, confident image when you’re networking. But this talk reduced me and a lot of other people to tears. I left as soon as it was over.

Outside the meeting, I unlocked my bike and pedaled home. Nowadays, bicycling is how I get around town. When I was younger, I bicycled through all 50 of the United States. My travels included many of the areas devastated by Hurricane Katrina.

While on the road, I traveled on a shoestring, relying on the generosity of strangers for food and shelter. This was especially true in the Deep South, where hospitality wasn’t just a lovely experience. Southern hospitality kept me alive and pedaling. It was high time to return the favor.

Through volunteering at Habitat for Humanity, taking construction classes at Pima, and working on my house, I’ve developed a decent set of handy-skills. So, I started searching the Internet for construction volunteer opportunities on the Gulf Coast.

My search turned up San Diego-based International Relief Teams, which needed members for its November construction crew. I applied, got accepted, and on November 5, I was on a plane, headed for Gulfport, Mississippi.

My 19-member crew included an accountant, several carpenters, a preacher, a plumber, an electrician, a smokejumper, a Marine, and retirees from various military and civilian careers. We did everything from electrical wiring to installing drywall, hanging doors to replacing bathroom fixtures, and framing walls to roof repairs.

Pascagoula, MS: The twisted I-beam used to anchor a house to its foundation in. Katrina’s 25-foot storm surge washed the house away. 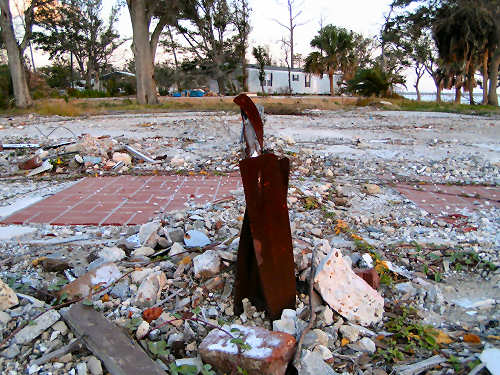 We worked for homeowners who were living in cramped FEMA trailers, coping with the loss of most, if not all, of their possessions. I worked for a man who sat on his porch and stared into space for hours. You could try as hard as you could to think that this is just another construction job, but it’s really hard to install drywall or pull electric wire while you’re fighting back tears. 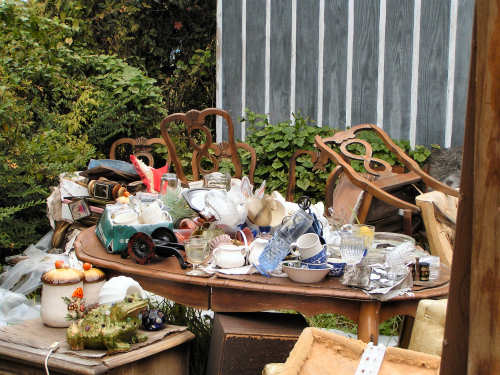 Despite their personal tragedies, the homeowners we worked for were very grateful for our efforts. In fact, I stopped at one house where the homeowners insisted on hugging me, even though I wasn’t working their job. Another homeowner insisted on coming out to the church where we were staying so she could help serve our farewell dinner on November 11. But the church wouldn’t let her. Instead, they made her the guest of honor and the emcee recognized her from the podium.

During the cab ride home from the airport shuttle stop, I tried to make a joke about my house still being here, but it fell flat. Where I’d just come from, that remark was anything but a joke.

What Should I Look for When Choosing Home Health Care? Guest Post by Nicholas Rubright As your … END_OF_DOCUMENT_TOKEN_TO_BE_REPLACED

Guest Post by Lance Cody-Valdez If you’re a solopreneur, you may be wondering if you’ll ever have … END_OF_DOCUMENT_TOKEN_TO_BE_REPLACED

December 2, 2021 Guest post: Teresa Siqueira If you have a busy … END_OF_DOCUMENT_TOKEN_TO_BE_REPLACED