1 : one that accompanies another : COMRADE, ASSOCIATE; also : one that keeps company with another
2 obsolete : RASCAL
3 a : one that is closely connected with something similar b : one employed to live with and serve another
4 : a celestial body that appears close to another but that may or may not be associated with it in space 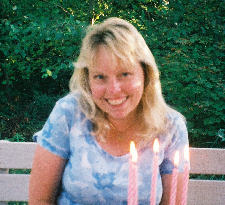 For the last five years or so, Janel Weiss Maurer has been our mother’s companion. I took a look at how Merriam-Webster’s described companion, and it would be difficult to not include all of the descriptions. Except “rascal,” which the dictionary says is obsolete anyway.

Can we say a celestial body? Absolutely. She has been like a bright star in Mom’s life, and in our lives. None of Mom’s children live in Bellingham, and Janel has been the bright and shining center of her life for the past five years. Janel and her new husband, Dennis, have been instrumental in faithfully helping move Mom and her belongings as she was transferred from institution to institution. They went above and beyond, both in doing this, and in being with Mom…being a loving comfort to her as her world began to unravel.

Ethel has been, I believe, one of the most wonderful blessings in my life. I met her about three years ago when I started attending Fountain Community Church. She had had a stroke, and was living in the home of her daughter-in-law and son, Janet and David Crook.

If I were to have picked who I would have had for a mother, Ethel would have been it! I love her as a mother! Sometimes we even argue like a mother and daughter! Not really argue, but disagree. I usually let her win.

She has brought so many gifts into my life. Those gifts are: Love – music – her sense of humor – her love for doggies, and her wonderful children, David and his wife Jan, Calamity Jan, Carolyn, and last but not least in any way, Judy. There are no words really to convey my love for Ethel and her children who have become a true family to me! There are also no words to convey to God how THANKFUL I am for them all!!!!!! I LOVE YOU, ETHEL 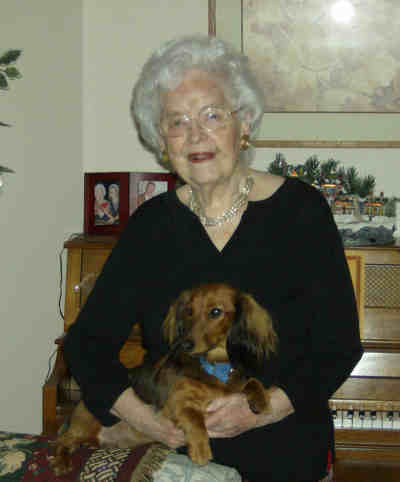 Janel wrote the following while ago referring to this picture of Mom and Toby (who lives with Janel, Dennis, and Lindsay):

Here she is, my darling mother, Ethel. She always called me “her girl.” This picture of her was taken last year on Thanksgiving day. I went over to her apt. to help her shower and get dressed for the day. Such a beauty at 96 years old! God placed her in my life, and I sit here in awe of the richness that came into my life because of her. A lot of people we would meet would think we were mother and daughter; and although we weren’t by blood, we were by spirit. And everywhere we went, people knew her. Either because she had been their music teacher years ago, or their children’s teacher, or from the Symphony… Oh the pain that resides in my heart at this moment is too overwheleming to bear at times. The pain of missing her. “God, you have her now with you.” Thank~you from every fiber of my being for bringing her and I together for the last six years. I am forever grateful, and I am forever changed because of her.”

Following is a message from Dennis Maurer:

Judy, This photo of Ethel and Toby was taken this last Thanksgiving day. I took Janel over to Ethel’s so Janel could help Ethel with a shower and getting dressed for the day. Ethel was going to have Thanksgiving with Doug, Ethel told Janel that she did not have to come that day; but, Janel said there was no way that she wouldn’t go give Ethel her shower and help her get dressed for the holiday. I have always been impressed with the love that Janel has had for “her Ethel.” Janel has told me that she wanted to get into a different line of work for a few years now; but, that she would never leave “her Ethel.” So as long as Ethel was still alive, she would continue doing home health care. I did not know Ethel as long as Janel did, but I love her too! And I love her family as well.

This is a photo of Mom tutoring Janel’s daughter, Lindsay. Says Janel:

Just to recap. Five years ago Mom had a stroke, and during her recovery, it was learned that she would need someone from time to time as a companion. Janel appeared as if by coincidence, and has been a defining part of the family life since that time. She spent at least two days a week taking Mom to Music Club, the beauty salon, the doctor’s office, etc. but was in touch with her by phone all the time.

During the last few months of her decline, we as a family would have been at a complete loss if it weren’t for the love and loyalty Janel gave our mother. She is our sister. And here’s a photo of Janel with Mom, Carolyn Crook Downing, and Jennifer Downing Mabey.

What Should I Look for When Choosing Home Health Care? Guest Post by Nicholas Rubright As your … END_OF_DOCUMENT_TOKEN_TO_BE_REPLACED

Guest Post by Lance Cody-Valdez If you’re a solopreneur, you may be wondering if you’ll ever have … END_OF_DOCUMENT_TOKEN_TO_BE_REPLACED

December 2, 2021 Guest post: Teresa Siqueira If you have a busy … END_OF_DOCUMENT_TOKEN_TO_BE_REPLACED