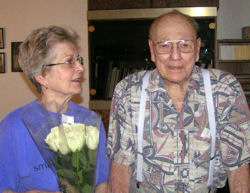 Three years ago yesterday, my husband, Jack Vorfeld, asked my brother go to Safeway and buy some roses. He did so. Then the two of them came into my home office, where Jack presented me with the roses while David took a picture. It was our 33rd wedding anniversary.

A little over three months later, Jack was dead. What a swift and terrible downward path he took. He fought death with every ounce of his being. In August, he began losing weight and having digestive problems (we thought). Such weight loss, and no answers in spite of many tests. To make a long story short, a different type of symptom finally got us to the ER, where some tests revealed pancreatic cancer.

Much of the family came to say goodbye, but we had no way of knowing how quickly he would go, and it broke our hearts that his brother, Bob, didn’t get to see him to say goodbye.

Jack had so much presence. Wherever he was, his energy filled the room. I wanted to share the photo three years later and pay tribute to a very unusual guy. We were kind of a May-December marriage, but because he was always so interested in what might happen tomorrow and what he might do to make it better, we never had a dull moment.

I also wanted to share something his son, Ted, wrote when he discovered his dad was terminally ill. The following so truly reflects Jack’s character:

Things My Dad Taught Me

1. Don’t blow your own horn (brag)-someone else will do it if you really did well

2. If you steal, you better steal a lot so your stay in prison will seem worthwhile

3. It isn’t a bother when friends ask for help-that is what friends are for

4. When driving, you may be may be right, but you might be dead right

5. You can learn something from everyone, regardless of that person’s education or background

6. The most important things in life are to have a good family and friends

7. The best legacy you can leave is an honorable name

9. You can’t grow hair and brains at the same time

Thanks, Ted. And given the last item, it stands to reason that Jack spent a lot of his life growing brains.

What Should I Look for When Choosing Home Health Care? Guest Post by Nicholas Rubright As your … END_OF_DOCUMENT_TOKEN_TO_BE_REPLACED

Guest Post by Lance Cody-Valdez If you’re a solopreneur, you may be wondering if you’ll ever have … END_OF_DOCUMENT_TOKEN_TO_BE_REPLACED

December 2, 2021 Guest post: Teresa Siqueira If you have a busy … END_OF_DOCUMENT_TOKEN_TO_BE_REPLACED