You are here: Home / Community Service / How to keep balanced while helping Katrina victims

My friend, Martha Retallick, of Western Sky Communications, recently returned from her third trip to part of the area devastated by Hurricane Katrina. I asked her a few questions:

My first post-Katrina reconstruction trip was in November 2006.

I was an emotional wreck. My own life wasn’t going too well, and to be surrounded by so much devastation (of property and lives) was hard to take. But I had borrowed a digital camera from you, and that camera turned out to be a sanity-saver. It also motivated me to revive my childhood passion for photography. 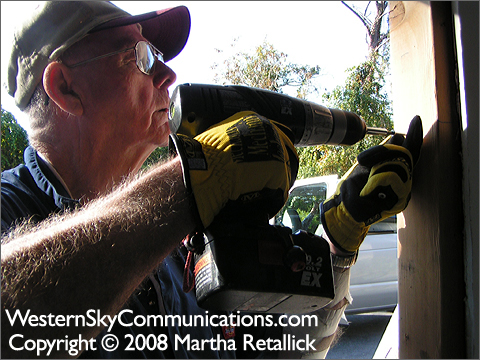 Trip #2 was in July 2007. This time, life was going better, and I also had my own camera along. Having just purchased it, I had to struggle to get good photos. I also had to balance the photography with the construction work, and this was quite a challenge.

Trip #3 was in July 2008. It was with the smallest of the three groups I’d been part of, and a couple of the others were not interested in being photographed. So, the camera was relegated to nature photography sessions that happened before and after the workdays and during our lunch breaks.

By the time this trip was over, I realized that I’m much more interested in photographing construction than actually doing it. So, this is one of the areas that I will pursue in my emerging career as a professional photographer.

How have your building skills improved each year?

They’re somewhat better, but I still rank myself down at the “Humble Apprentice’s Lowly Assistant” level.

How have your photography skills improved each year?

Much better, but I’ve been practicing them more than I have the construction skills. 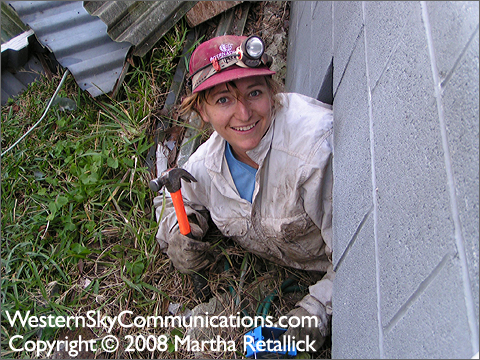 What would you say to people considering joining groups like IRT in helping out hurricane victims?

You will be going into an area that was the scene of a major disaster. Three years later, there’s still a lot of cleanup and rebuilding work to do. That’s what you’re there for.

There’s nothing wrong with taking a break to chat with the homeowners you’re working for, but don’t get carried away. You’re there to do a job. And they’re first on the list of people who want it done quickly so they can move back into their houses.

For your after-hours time, it’s important to keep doing the things you enjoy. Some of my fellow team members discovered that our host church had a great basketball court — and they used it. Ditto for the pool and foosball tables and the big-screen TV. There also were several guys who made it a point to hit the local bars.

It’s also important to bring something along that is comforting to you. Remember, you’re doing disaster relief work. It can be stressful. Some of the IRT-ers brought along religious literature to study. Others brought long novels.

For me, the comfort items were the camera and laptop computer. And did I mention that the host church had really snappy WiFi? Nothing like editing the day’s photos while listening to KXCI from Tucson.

What Should I Look for When Choosing Home Health Care? Guest Post by Nicholas Rubright As your … END_OF_DOCUMENT_TOKEN_TO_BE_REPLACED

Guest Post by Lance Cody-Valdez If you’re a solopreneur, you may be wondering if you’ll ever have … END_OF_DOCUMENT_TOKEN_TO_BE_REPLACED

December 2, 2021 Guest post: Teresa Siqueira If you have a busy … END_OF_DOCUMENT_TOKEN_TO_BE_REPLACED