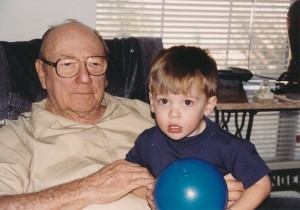 What a fun thing the last few days to look back on my years with Jack Vorfeld, whose birthday was February 29.

He loved being born during a Leap Year, and never stopped reminding me (and anyone else who would listen) that I married a teenager and thus I robbed the cradle. And shortly after we married he met my aunt, Elva Dibble Boynton, who also had a Leap Year birthday. Jack always made a point to phone her on her birthday.

I’m showing a picture of Jack with our grandson, Jody Patrizio, who is now 21. I have many, many pictures of him with his grandchildren, but this picture of him and Jody was handy. I believe that he was born to be a grandfather.

Yes, he was many things to many people: he was a superb husband. And engineer. And handyman. And on and on…but when he was with his grandchildren, there was a special glow about him.

I remember when Dana Kukuruda was born. We got a phone call that Vicky had just given birth to a girl. He grabbed some clothes, stuffed them in an overnight back, hopped in his pickup truck, and headed for California. it was that simple. He may have paused long enough to kiss me goodbye, but it would have been a quick peck on the cheek. His heart was in California.

Yesterday Dana mentioned his birthday on her Facebook page. I was in the process of figuring out what to write to honor his memory. Her post helped. And Dana and Derek Engstrom are getting married in Hawaii this summer, close to our anniversary date, July 3.

I sometimes look back and think about the qualities that attracted me to Jack when I was in my mid-thirties. I found the best description in Seth Godin’s “Stop Stealing Dreams.”

Godin was writing about education, and he listed these qualities before asking some questions about how we view the educational system:

I read through that list and thought, “Wow! These all describe Jack.” He enjoyed looking back at his life and experiences, but he was constantly thinking of the future. He looked forward to many new experiences, and he was very innovative. And supportive. Let’s just say that the entire list describes his attributes, to one degree or another.

What a heritage he left to his family and friends, and particularly to his grandchildren. Plus Felicia and Hannah, whom he considered as granddaughters. They are blessed!

What Should I Look for When Choosing Home Health Care? Guest Post by Nicholas Rubright As your … END_OF_DOCUMENT_TOKEN_TO_BE_REPLACED

Guest Post by Lance Cody-Valdez If you’re a solopreneur, you may be wondering if you’ll ever have … END_OF_DOCUMENT_TOKEN_TO_BE_REPLACED

December 2, 2021 Guest post: Teresa Siqueira If you have a busy … END_OF_DOCUMENT_TOKEN_TO_BE_REPLACED