You are here: Home / Disabilities / Confessions of an Outdoor Junkie with a Disability 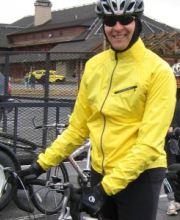 It’s not that I can’t leave. I’m not under house arrest. My lifestyle won’t let me. I’ve become spoiled by the abundance of accessible recreation available to me–accessible by every definition, including the one used by the ADA. Utah is an outdoor recreation paradise … especially for people with a disability. It’s all about freedom, and I have a lot of it here. There are also a lot of resources for equipment, training, rehab and social connections.

Utah is fast becoming an elite World Class training ground for athletes of all disciplines. And that bodes well for all of us who call this home. Because we get to play on the same World Class playground. For that we can thank the 2002 Olympic Winter Games. In the years leading up to the games, Utah saw a flurry of construction, as new winter sports venues from skating rinks to ski jumps popped up like mushrooms. Utah’s winter resorts added lodging, ski lifts, new runs, and restaurants in anticipation of the world’s arrival. For a local (a true local, since I was born here) it was like Santa Claus had come with deep pockets and filled the landscape with toys of every kind.

I live in Salt Lake City, near the mouth of Big Cottonwood Canyon, 13 miles from the snowboarding and backcountry skiing hot-spot of Brighton. Solitude, with its charming European style ski village, is just one mile closer. About a mile and a half south is the entrance to Little Cottonwood Canyon, portal to the legendary steeps and deeps of Alta and Snowbird. Park City, Deer Valley and The Canyons are a 25- minute drive.

A former ski instructor, I can barely stand up on skis now thanks to one ill advised dive into a reservoir, a broken neck, and quadriplegia. Yes, I’m upright and walking, but balance and agility on skis is sketchy at best. But I keep trying. The mountains that are literally in my face won’t allow me to ignore them. They keep calling and I keep answering. I used to be quite a bit more proficient on skis than I am now, even after my accident. I guess aging with a spinal cord injury speeds up the loss of agility and balance. At any rate, I don’t venture beyond the groomed intermediate slopes anymore. And when I fall, it’s a major event getting up, usually requiring me to remove at least one ski. I think I know what a turtle feels like on its back. With not much abdominal strength, it’s a struggle to get vertical again.

Allow Me to Backtrack
After my accident, I had given up on the idea of skiing. But one early fall evening, I found myself at a Warren Miller ski movie. (I’m old enough to remember when Warren Miller himself used to come and narrate his movies live, while his 16 millimeter projector clicked and clacked away in the background. Now that’s old school.) The movie had a segment on blind skiers. I remember watching this blind guy skiing down the mountain behind a guide, who would yell “left” and “right” to keep them in the middle of the run. I also remember the broad grin on the guy’s face as he made one smooth turn after another. It was like a bolt of lightning hit me. “If that guy can ski and enjoy it…then maybe I better get off my butt and get back up the mountain.”

So the next day, I went to The Sport Loft, local ski shop owned by an ex-Alta ski instructor named Earl Middlemas and bought a pair of Kneissl Super Shorts. At the time, the current technology – the Graduated Length Method (GLM) – had everyone skiing on shorter, slightly wider skis. I went from the 210 centimeter Hart Javelin that I had used as a ski instructor to a 150-centimeter Kneissl. It was a whole new world, in more ways than one.

My first time back on skis I went to Snowbird, the last place I skied before I broke my neck. But instead of taking the tram to the top of 11,500 foot Hidden Peak and blasting down the black diamond run known as Regulator, I took the beginner lift to the top of a run called Chickadee, Snowbird’s version of a bunny slope. I was shaking badly. I could barely buckle my boots. But on December 6, 1979, seven years after I broke my neck, I made my first turn on skis again.

Fortunately, my mechanics were still in place from my days as a ski instructor, and the new equipment made it much easier. I was able to negotiate the 50-foot vertical drop of Chickadee without falling. But I was back in the mountains standing on a pair of skis and soaking in the magnificent scenery. My world had suddenly expanded.

That’s what happens with a disability – your world shrinks. You feel isolated, different…like you don’t belong anymore. At least that’s how I felt. I still battle those feelings. I’m caught between the able-bodied and disabled (I hate that word) world. I’m somewhat mobile and when I’m standing without moving, I don’t look like I’m disabled. But when I move, I walk like a wounded duck. Slow, jerky, stiff. My right ankle is fused, in an effort to provide more support for injury-weakened muscles. But I can’t complain. Maybe it’s a stretch to call me disabled…maybe impaired is a better word. I just know that every step takes a lot of concentration and it’s hardly natural. But back to where I began.

Today, 35 years after my accident, I feel more fortunate than ever to live where I do, and I know that bicycling, skiing, golfing….any of my outdoor passions, is a privilege that I will never take for granted. There are so many resources I can take advantage of here…nearby playgrounds, state-of-the-art training facilities, well-trained instructors and people dedicated to helping those of us with medical limitations. I’ll get into more detail about all of those people and places in my next article. Stay tuned.

Reprinted by permission of DisaboomLive.

Whether you have spent years working from home or this is new to you, staying productive can be … END_OF_DOCUMENT_TOKEN_TO_BE_REPLACED