You are here: Home / Uncategorized / American Diabetes Month has special meaning for me 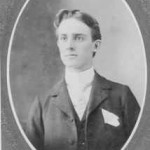 I grew up with a grandfather who had diabetes. He was a doctor in Bellingham, Washington (Solon R. Boynton, MD), and did a remarkable job of keeping his diabetes managed, but it wasn’t always easy. Grandpa Doc was born November 9, 1879. I can’t do the math on that! Well, I could, but suffice it to say it was a long time ago.

Later, his daughter (my mother, Ethel Crook), developed diabetes as well. She kept it pretty well under control, but, given her love for sweets, it was always a battle. Had she lived, she would have been 99 years old today.

So far, my generation has avoided diabetes, but we do indeed watch our sugar intake, and the process of some things converting to sugar.

Following is a news brief from Disaboom Live:

According to the American Diabetes Association, 24 million children and adults in the U.S. are living with diabetes, with an additional 57 million Americans at risk for developing type 2 diabetes. So, in order to raise awareness about diabetes, a disease that may lead to life-threatening complications (stroke, kidney and heart disease, amputation or blindness), the American Diabetes Association is launching Stop Diabetes, a national movement to confront, fight and stop diabetes.

People living with or affected by diabetes can visit the Stop Diabetes site and share their stories and videos or connect with others with diabetes Visitors can also learn more about becoming an advocate for people with diabetes, bike, walk or volunteer at fundraising events, get information about diabetes screening, find lifestyle support for living with diabetes, or make a donation.

What Should I Look for When Choosing Home Health Care? Guest Post by Nicholas Rubright As your … END_OF_DOCUMENT_TOKEN_TO_BE_REPLACED

Guest Post by Lance Cody-Valdez If you’re a solopreneur, you may be wondering if you’ll ever have … END_OF_DOCUMENT_TOKEN_TO_BE_REPLACED

December 2, 2021 Guest post: Teresa Siqueira If you have a busy … END_OF_DOCUMENT_TOKEN_TO_BE_REPLACED